“It is not that the meaning cannot be explained. But there are certain meanings that are lost forever the moment they are explained in words.”

Stepping into a crowded elevator Monday morning, about to ascend 27 floors, to where the winter sun rises after arrival and sets before deparature, a colleague offers a hushed elevator-speak greeting, asking "how was your weekend?"

sounds and images of the present disappear.  goosebumps on the surface my skin and the sense of a chill in my bones, as it all comes back...

Feelings and memories that are hard to put into words.   a weekend where multiple winter sunrises and sunsets are also observed, not from the comfort of a climate controlled home or building, but outside, where the below-freezing climate is controlled by layers of gear and levels of effort.

the first scene that comes to mind is 8am sunday monrning, when i had been on my feet, attempting to make forward progress, for the last 22 hours and 78 miles.  it's cold.  so cold that water vapor from exhaling freezes onto my hair, and so cold that my eyes freeze shut every time i blink. 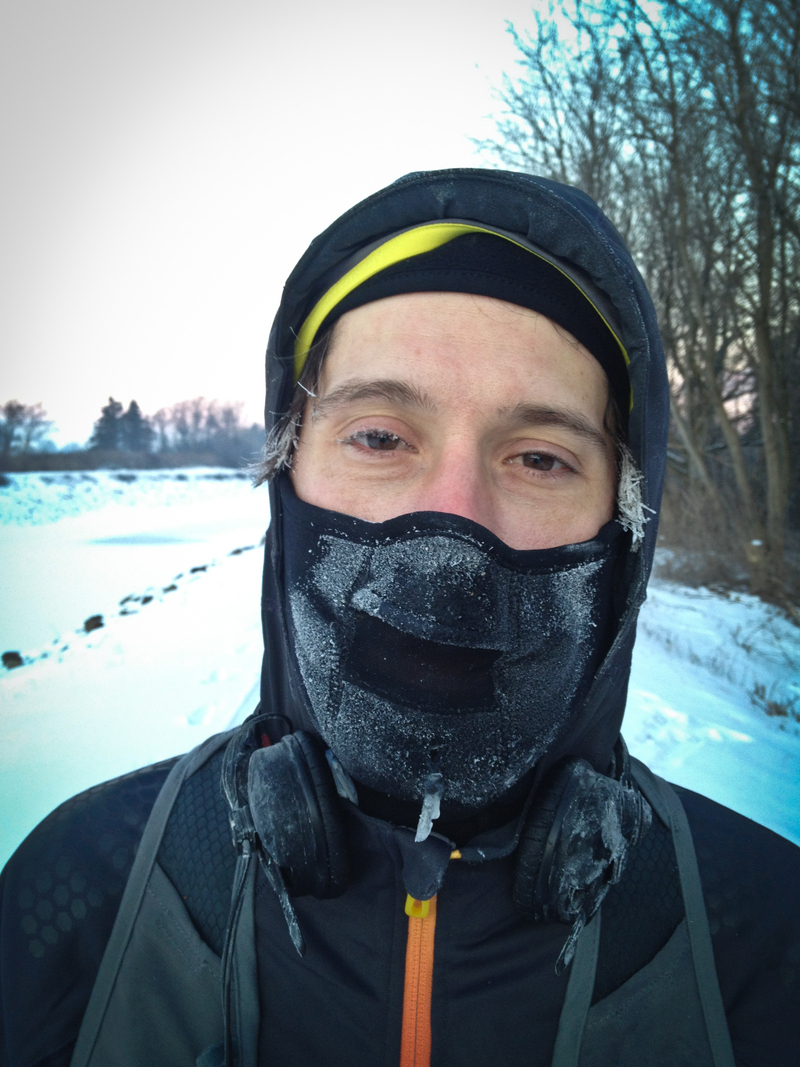 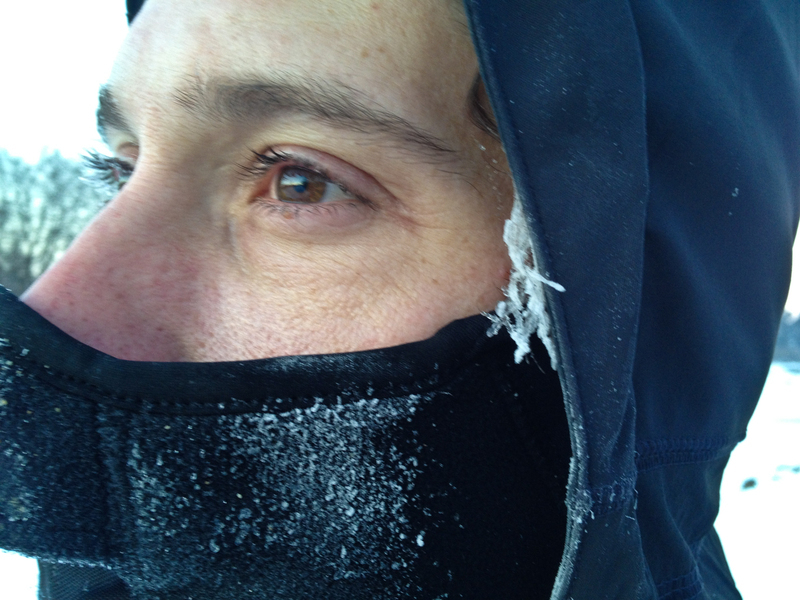 many miles and many hours remain, and over the last few hours, the temperature has rapidly dropped from a comfortable 15-20 down to single digits, with a "feels like" of -1.  adam's thermometer reads 3 degrees, we are far from an aid station, far from any other people, and i sense that we are both quietly worried that we are going to freeze.

"let's try to run for a few minutes" adam says, trying to get us to generate body heat.  it can be hard to continuously run though, 70 or 80 miles into a 100-miler.

as in life, i turn to music.  a motivating song comes on, and we run.  this usually lasts for the first 30 seconds of the song.  then, we talk about the song and about music and about life, and wait for the next song to get us moving, so we can warm up a bit.  then we run for a whole song, and we are warm.  then i walk for a whole song, and we begin to freeze, and adam reminds me to run again, as we both get just a bit too close to the edge. 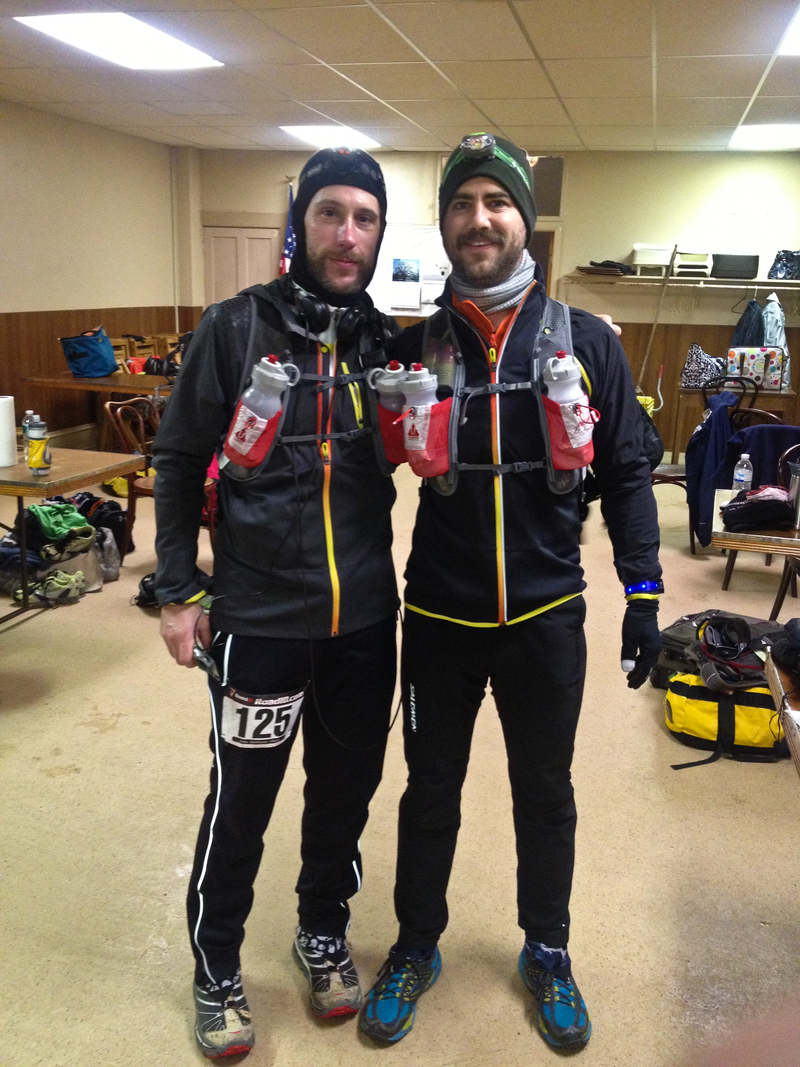 adam joined me as a pacer at mile 62.5.  previously, his farthest distance run was 8 miles, and he paced me for 25 miles.  wowow!

before he started pacing, he crewed for me, so i saw him every 12.5 miles at the aid stations, and every time i came in he was either helping another runner or laughing with another crew or some volunteers, yet he never missed a beat in taking care of me.  can't wait til it's his turn and i'm crewing or pacing for him.

62.5 to 75 was what you'd expect from a couple of old friends catching up at 3 in the morning after one of them has been running for 18 hours and the other is crewing and pacing at an ultra for his first time.

we had left the aid station at mile 75 well-preapred to do some run/walk in 15 degree weather, as we were perfectly comfortable during the previous 12.5 miles.  we didn't know the temp drop was coming, so we had left without enough layers, leading to 3 hours of being on the brink of freezing.

getting to the beginning...

this is michael, who i met at umstead 100 last year, have kept in touch with, and who i spent some time DNF'ing Leadville 100 (2012) with.  he introduced me to and previously DNF'd this race, dropping around mile 80 (same thing at the summer version as well).

We saw him each out and back, and finally, 23 hours in and during the cold snap, he was headed back in on the last leg (mile 90 or so for him) and would certainly make it to the finish line this time.

as we first saw him approaching this time, he exclaimed "THIS FUCKING SUCKS!"  we exchanged some high fives and congrats, and it sure felt good to see a friend who was confident and happy to be breaking through whatever it was that limited him last time around, knowing that this time he'd cross the finish line. 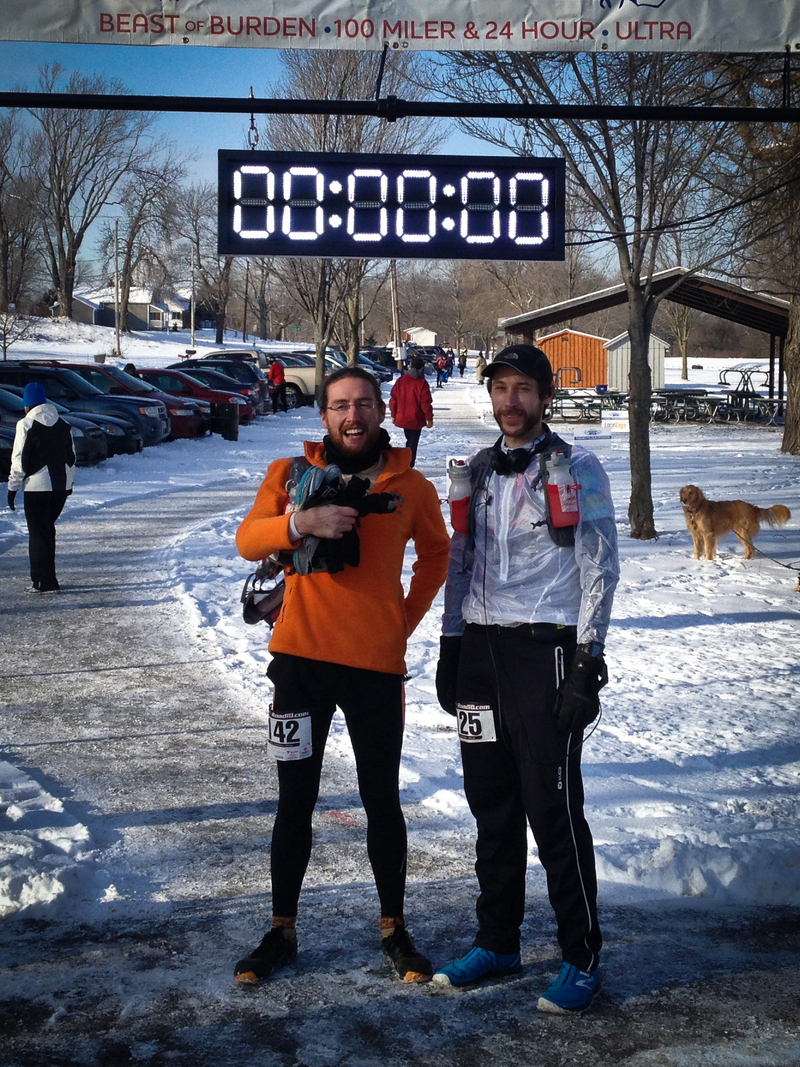 adam and me at the start: 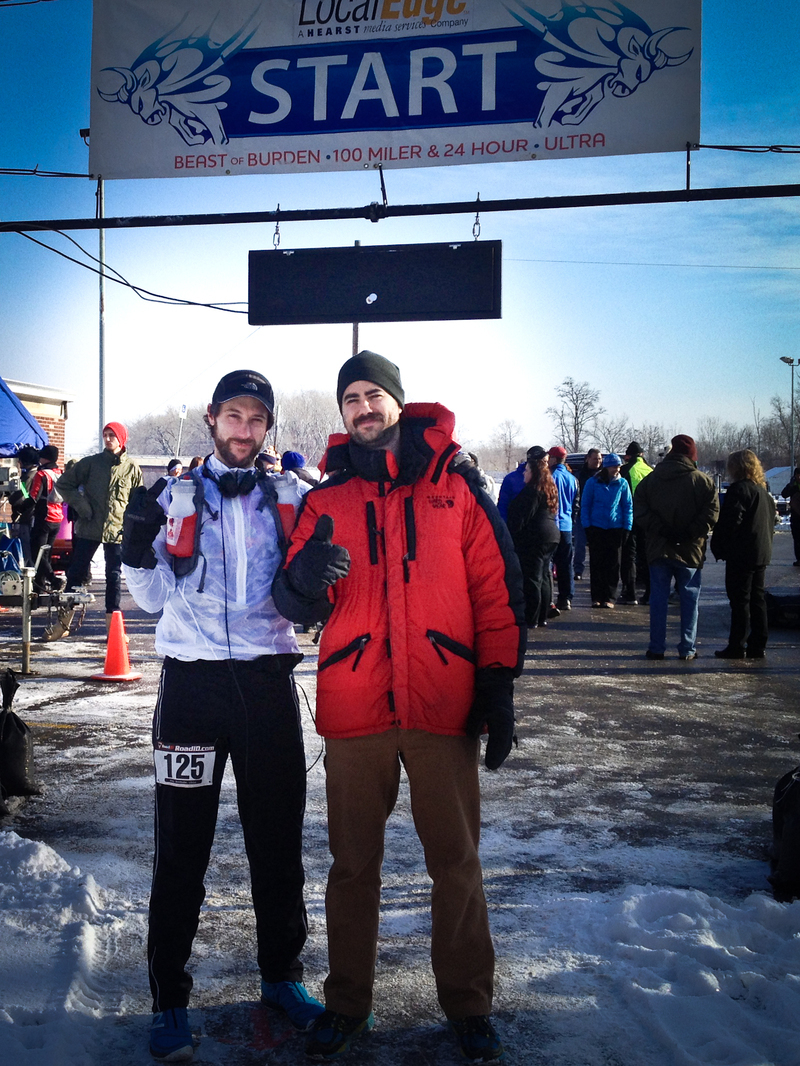 early on, it was nice to have runners nearby. the crowd thinned quite a bit after the first two out-and-backs, and after 12 hours most of the 50-milers were done.  35 people finished the full 100.  not sure how many FD's ("fuckin' done," the colloquial term for DNF) there were.

the picture below shows what the scene looked like the whole time.  run 100 yards of this course and you've seen what the entire course looks like, with a bit of variation added when the canal is on the left (back) instead of the right (out). 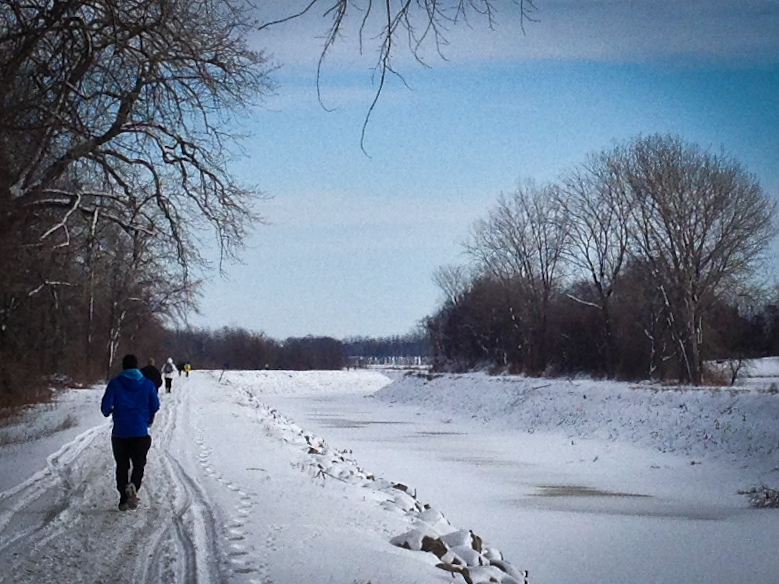 dramatic change in scenery, a lock: 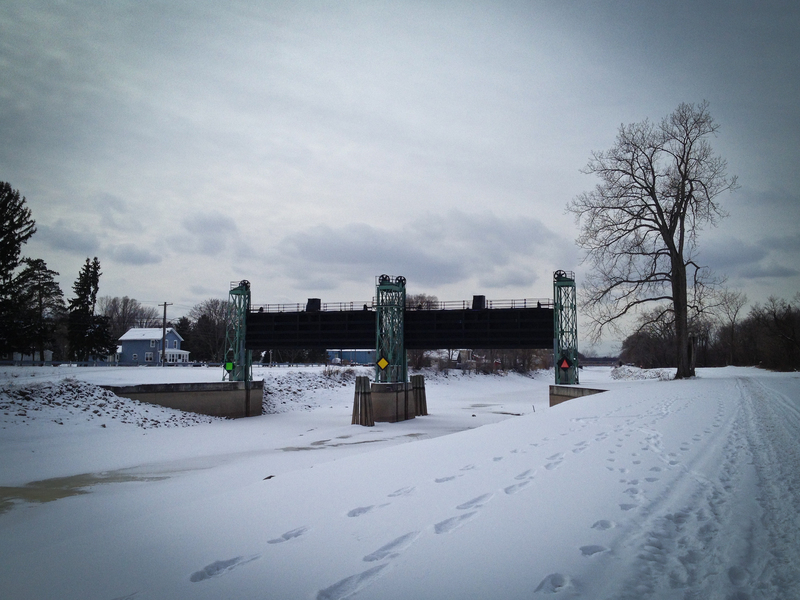 we'll come back to this part: 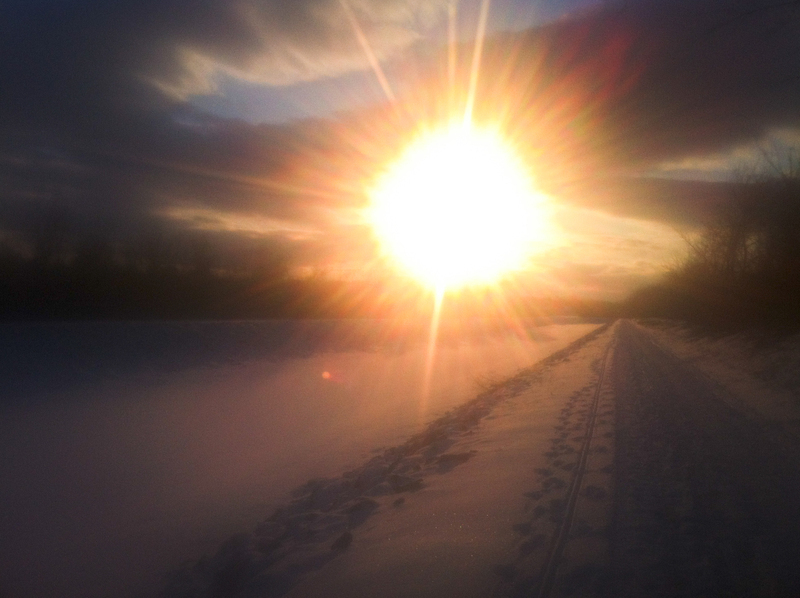 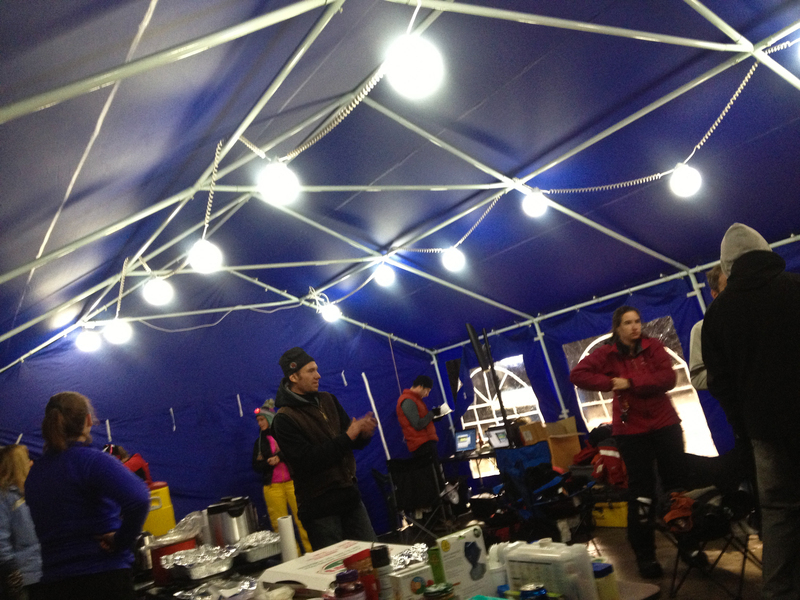 i had forgotten to eat for the last few hours, or just didn't care to, so i ate nearly an entire pizza and a grilled cheese sandwich or three.  eating 1000 calories at once is great to get things back to normal, though it's not too helpful when you need to keep moving forward, preferrably by running.

imagine being in the cold for 3 hours (after being the cold for 12 hours).  then imagine sitting in front of this: 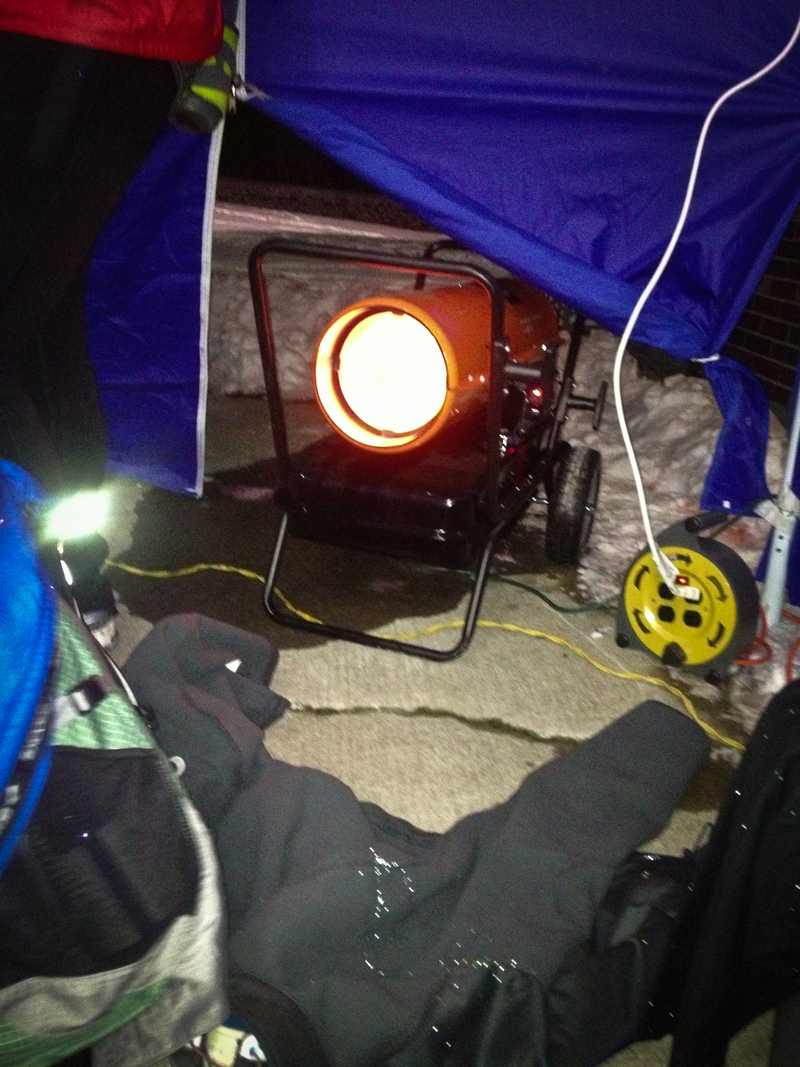 then imagine convincing yourself to go back out into the cold for 3 more hours.
many hours earlier, around mile 22, i reached down to untie or change the knot on my shoe, because it seemed like the shoelaces may have been digging into to some tendons on my left foot.  the shoelace was perfectly loose, so the ankle pain didn't make sense, or maybe had a different cause.
after standing up from a bit of rest in a foldy chair near that cozy heater at mile 50, it is revealed that the previously felt ankle pain was due to twist on an uneven surface (packed snow) , and is maybe something more like a sprain.  every step hurts.  every step fucking kills. heading out after mile 50, it hurts a lot to run, and walking hurts more than running.  it is also quite cold. 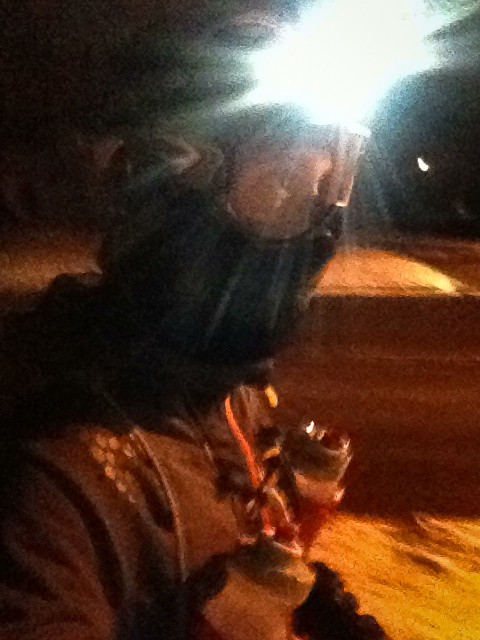 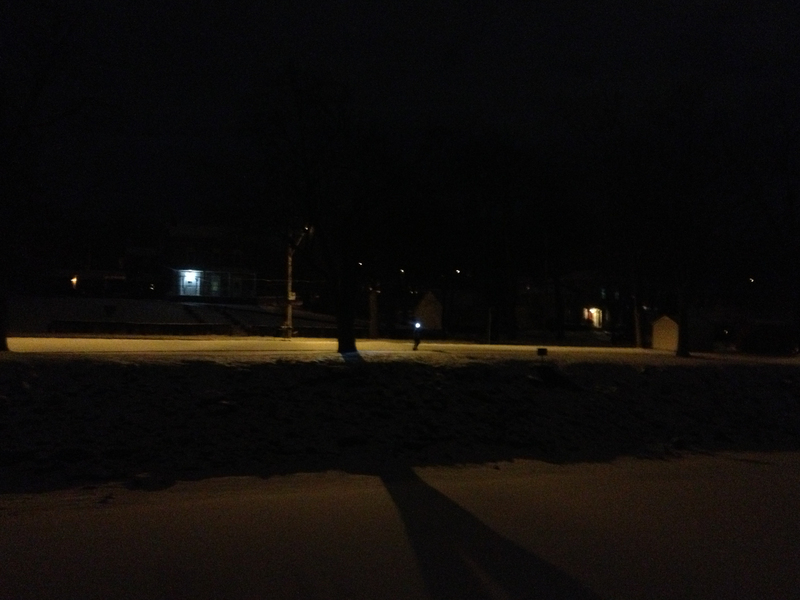 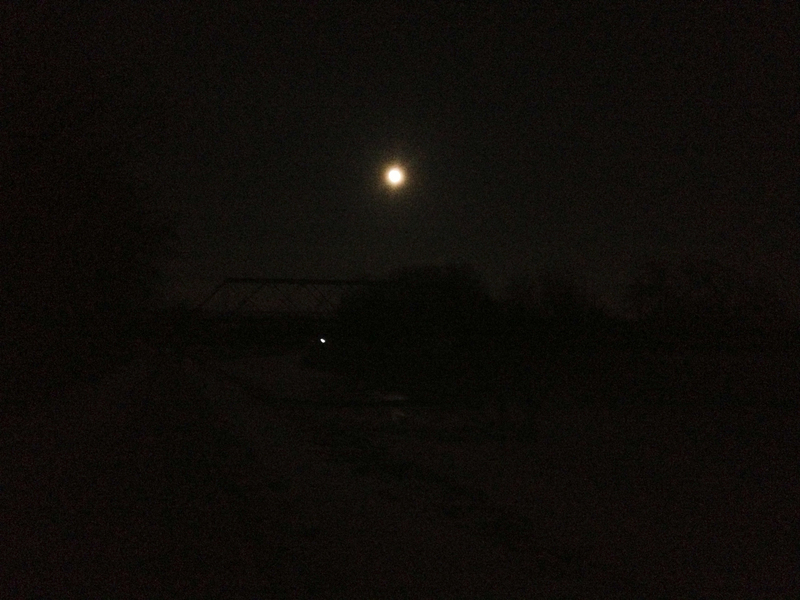 gasport aid station.  just like the previous heater, imagine being freezing, and then seeing this, and knowing there are miles and hours to go... 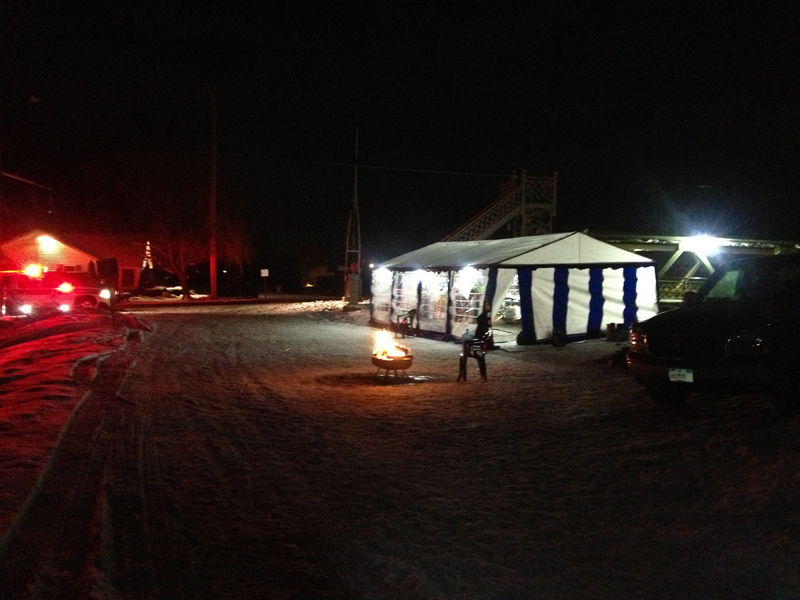 middleport aid station, at the 12.5/37.5/62.5/87.5 mile mark, is a town hall type room connected to a laundromat, which comes in handy for runners drying clothes. 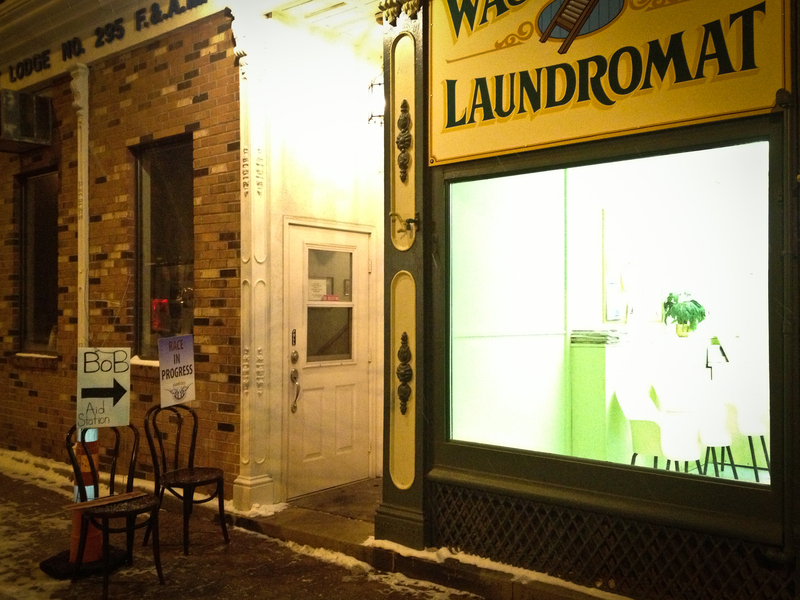 this was around 1am, just before adam set out to pace me.  i asked if there were shifts here, because these ladies were at the start 18 hours earlier, and they explained that this is their aid station and they are proud of it and that's why they do it their way, for the full duration of the race. 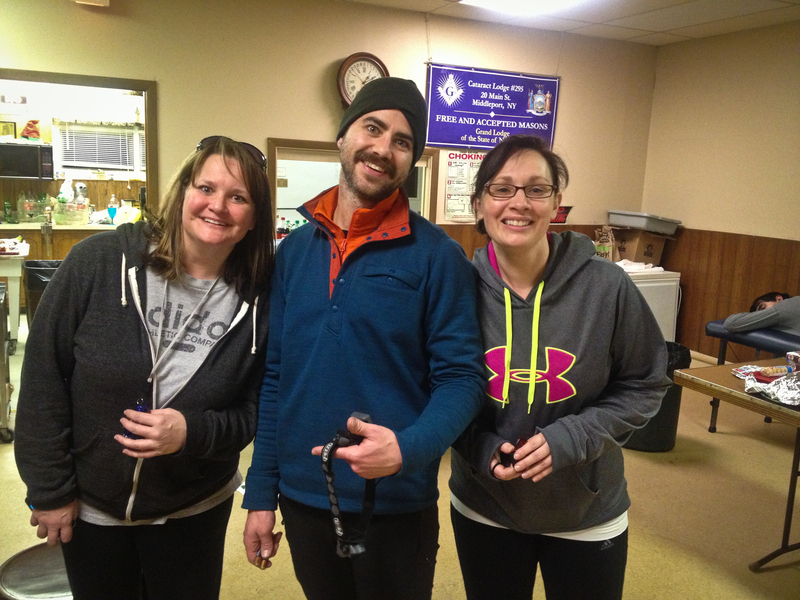 adam made it 25 miles and did great!  around mile 85 the cold snap broke and i was feeling good.  here he is, guiding me into the aid station at 87.5: 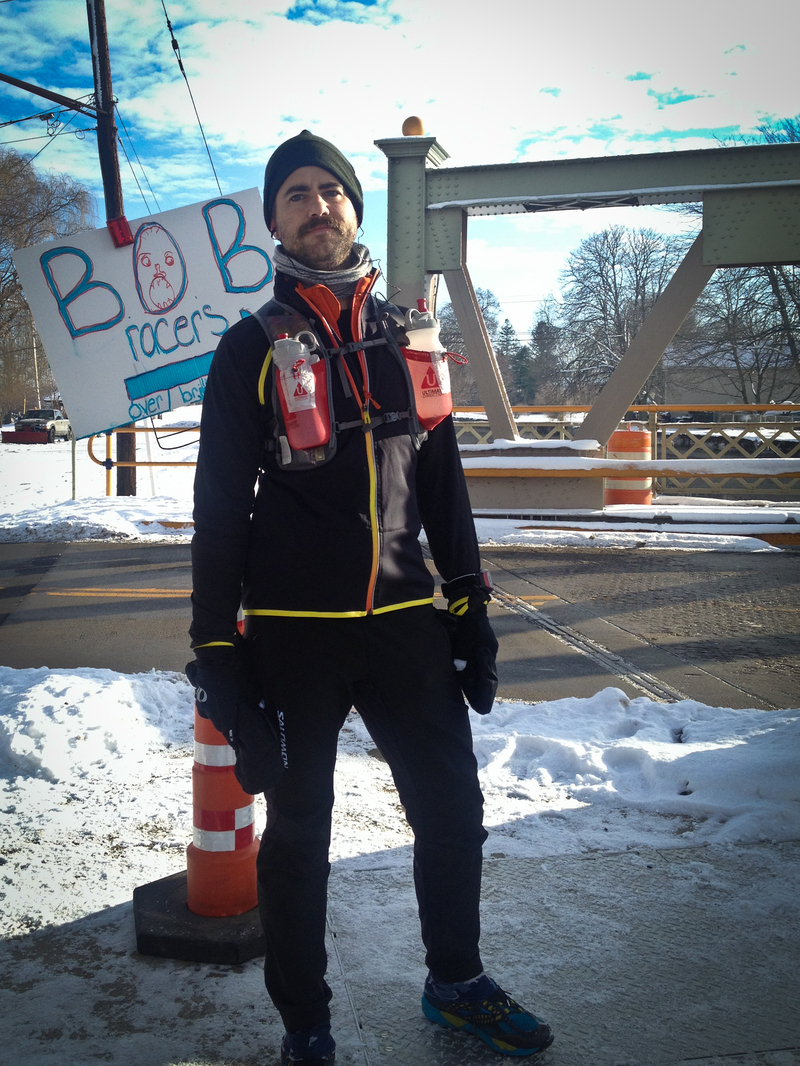 rolled out of the 87.5 aid station, blasting eye of the tiger, dancing along the trail, and excited to get it done... 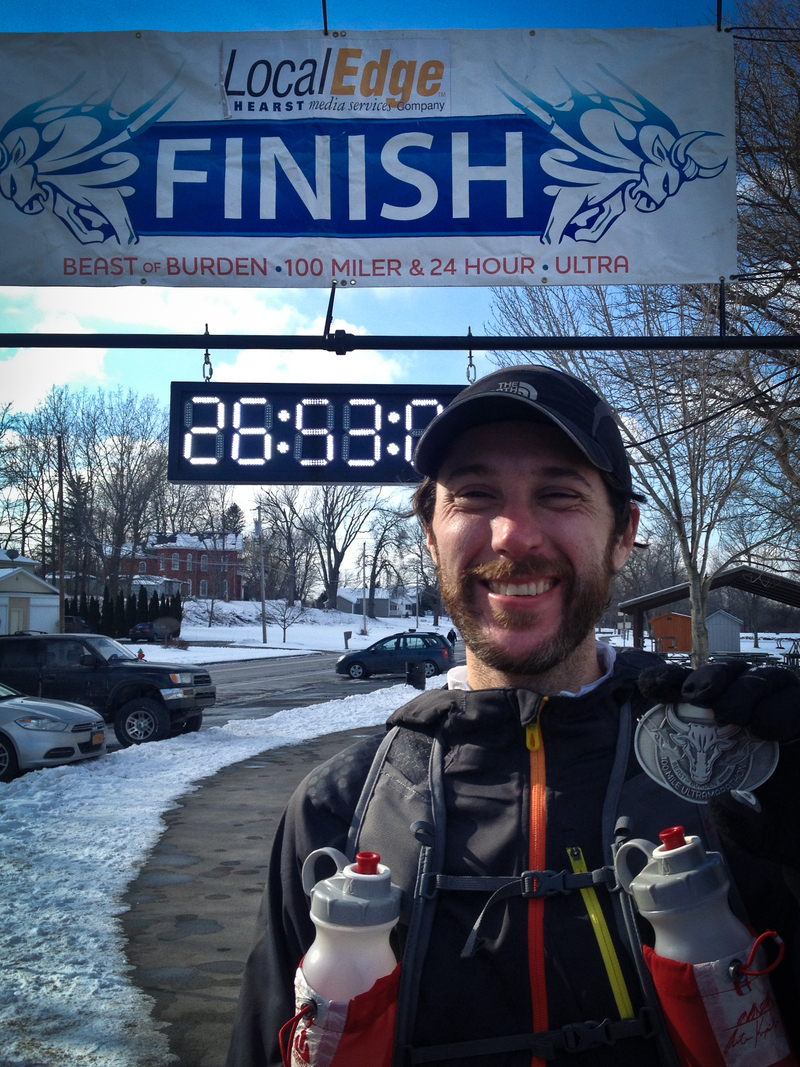 co-ban!  hanging out after the finish. 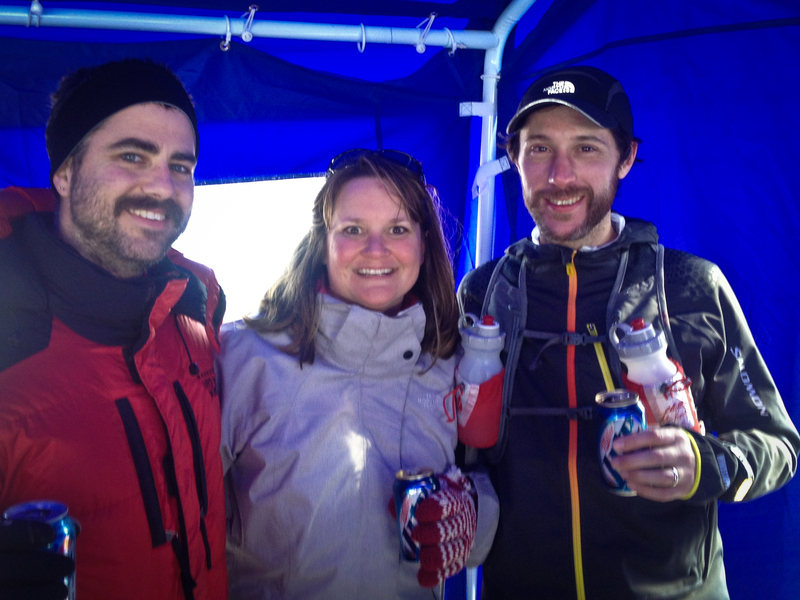 getting back to the part that i said we'd get back to...

the reason i was really hungry at mile 50 was because i didn't take any calories from miles 30-50 (+/- a few miles), becasuse i was in some outer-space, zen-nirvana-runner's high-alternate reality.
the monotony of the landscape combined with the challenge of 100 miles seemed to push things to a deeper level.
as i was running along, i felt a flood of emotions, and just found myself weeping.
weeping for all that is good and all that is bad and all that will be and all that won't be and all that may be.  for everything wonderful i've ever experienced, and for everything i've ever fucked up, or will fuck up, and for the beauty that is my kids' faces, and for beauty of being alive.
there are no words for this part of the day.  the closest thing i can liken it to as an adult is being on LSD.  the closest other thing i can liken it too is the memory of being a kid.
i remembered this feeling of tripping on acid and it was like the physical universe just sort of rotated away, and i found my self peacefully and conteplatively floating in space-time.  now was almost the same, with the added challenge of trying to float a pile of limbs forward in some coordinated fashion towards some defined end.  i don't know where time went and with every song that came on, i felt like i could feel the pure expressiveness of the timbre of every instrument of every song, and that everything in the music and beyond was expressing universal joy.
and the being a kid part...
pure emotions.
before we learn to think this or feel that, we just are.
we exist and we know what is true and what is right and there are no excuses.
it feels good because it is good or it feels bad because it is bad.
this felt good:

getting back to reality...
my tired legs notice the elevator sublty begins to slow.
reality starts to fade back in.
"how was your weekend?" i remember someone asked.
unable to find the words to explain the meaning, i answer:
"pretty good." 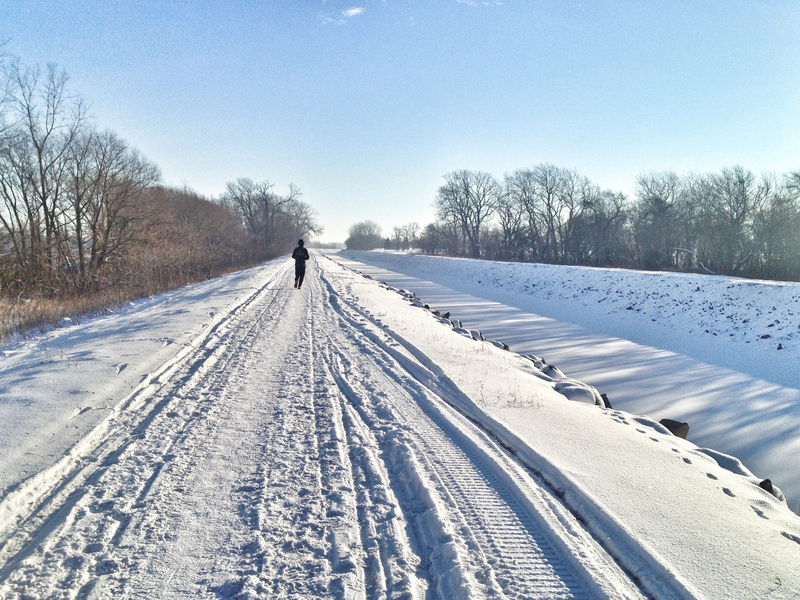